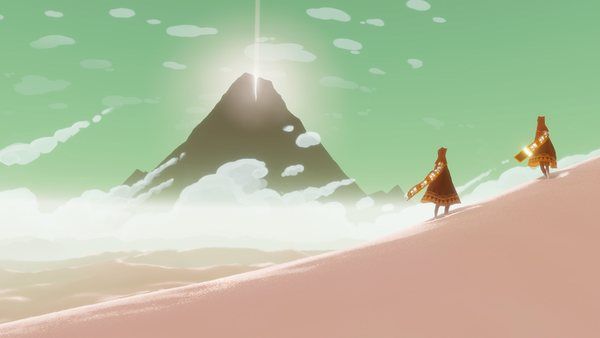 Journey is a game I never planned on playing, as it didn't strike me as something I would be interested in. My friend insisted that I sould play it though. It is only 2-3h experience after all - perfect for a livestream. Initially, the game used to be Sony exclusive, with PC port being relatively new. It was limited to EpicGames Store, which I tend to avoid, but with recent addition of Steam I had no more excuses for putting it off.

At first I didn't like the game. It may be a fault of the game, but it may also be the fault of my expectations. When we start, we have no idea what the goal is, what we should do, and what we can do. I assumed, somewhat correclty, that the game, among other things, is about exploration of the environment. The movement options, however, seemed very lacking in fulfilling this goal. Player character moves, somewhat slow, picking up the pace over time, which is great for wandering, but not really good for checking out nooks and crannies of the map. Quickly, we find a glowing symbol, which enables us with the power of flight! Or, at least a jump with a short glide. There are more of these glowy symbols to be found, and each one increases the length of a scarf on our character - and with that, the lenght of our flight. Still, with only enough power for one jump, or two small hops, I felt very constraint. Every rock and every ledge I had to jump over forced me to return to a point with flying paper... things, that would re-generate my energy. I have finished the first level, somewhat grumpily.

But then... things changed. There was a cutscene, showing some history of the games' world, represented in stylised paintings. Neat stuff. After that, a gate has opened, and I was able to proceed. At the end of a long corridor, I saw...

There he was. She? It? Who knows. An outline of a figure, much like the player character, standing at the exit. I was not alone in this. However, before I could reach the exit, this new character dissapeared. I reached the end and saw a valley, full of sand, with some ruins and tall columns. And new, glowy symbols. I went for the first one, and, as I reached it, there was this other person. They didn't seem to notice me at first. The only way to interact in Journey is to... chirp... and a... qr... code... comes out? It is a bit weird. But anyway, I approached this person and tried to interact. They chirped back, but otherwise seemed non-responsive. I wasn't sure if that character was another player, or just an AI npc (spoiler: it wasn't AI). Paying no mind to that person, I went my own way and started solving some clues, that would open a way to next level, with some more glowy symbols along here and there.

But then, I saw something unexpected. The other character, running around other side of the valley, and solving puzzles! Why would AI do that, I wondered? I went back to my companion, and, from there, we traveled to the newly formed bridge, that would take us out of here. From that point on, we travelled together. My companion was very kind, and very patient. Also, seemed to know the way very well. All of that made me believe it was just an NPC, as my usual experiences with other people in games were nothing like this. I have also discovered, that, when we were close to each other, we could charge our scarves. Yay for infinite flight!

At the start of one of the levels, I decided to just stand at the start and see what they do. My companion moved ahead, then paused. Walked a bit back and chirped at me, then moved on a tiny bit. Then moved back and forth a bit again. I still wasn't sure wether it was AI or not. Players usually move around frantically when they get impatient. But that companion seemed kind and understanding. It could not have been another person, because, as we all know, all people on the internet are assholes. I didn't want to waste too much time testing my companion, and we moved on.

At one point we made a wrong jump, and we ended up in a dead end. I thought it was just some pathfinding bug in the AI (but it wasnt!).

After a couple of nice and exciting platforming levels, we have reached a tower. Our goal was to find a way to climb it. It was at that point, that I lost my companion. I don't know where they went, or how we got separated. At some point I just realised, that they weren't there. I continued my climb alone. At the top, there was another cutscene. It showed my journey so far, and my companion as well! But the scenes of what was waiting ahead showed my character all alone. I assumed that the loss of my companion was just a scripted part of the game.

As I began to climb the snowy mountain, my scarf lost it's power, and my character froze over. It was tough, but I made it to a broken bridge. And there they were! My companion! Stood there, seemingly waiting for me. Happily, i ran to them, only to see my companion fail a jump over this broken bridge and fall to the path below, which was basically the start of the level. Another AI pathfinding derp, I thought (it wasn't!). I really liked my companion, so I decided to jump down after them and bring them back up the mountain.

As soon as I got down to them, I knew it was not my companion. They had different symbol! Another NPC? What was going on? Still we started to climb together. This companion seemed... different. And then, as we reached the bridge again, I realised. It was not AI! It was another player! Previous person knew the game very well, and went straight to the puzzles, but also patiently waited for me. This one, on the other hand, explored the environment, not knowing what to do. AI does not explore! Also, this person wasn't very good at platforming.

So we continued our journey. It was cold and dangerous, but, after many unfortunate happenings, we were almost reached the peak. And there, at that mountain, we collapsed into the snow, together, while a snowstorm blew over us.

Some white-robed figures gave me strength to carry on, but my companion wasn't there anymore. And I'm not exactly sure what happened either. Did I really reach the peak? Was I dead and it was afterlife? I guess each player has to find their own answers. Either way, I have reached the peak, and then turned into a ball of light, travelling backwards through all the levels, finally reaching a dune, where the game started, mimicking the intro.

After the credits, the game showed me a list of players I met. I was pretty sure there would be two, but it actually listed four.

It was a very nice experience. It showed me, that people on the internet can be kind. At least, when you can't talk to each other.

In the end, it was all good. I can really recommend this game as a one evening thing. It is worth it.