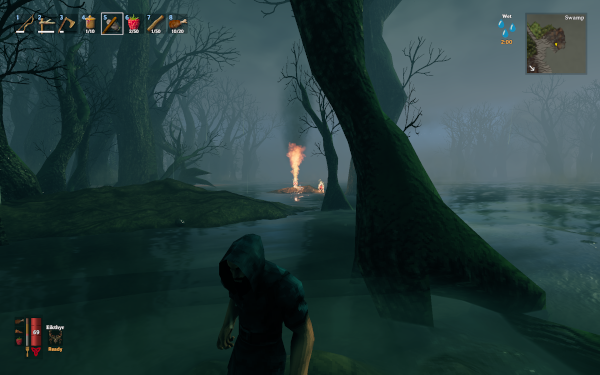 You might have heard about the recent survival game called Vallheim. A decent, indie game, made by a handful of developers, that launched it's Early Access on Steam. It occupied a lot of my time for a few weeks, and, during this time, I had a lot of fun with it. So let's have a look!

As already stated Valheim is a survival game, where you take on a role of a Viking warrior, who died on a battlefield, and was chosen by Odin to defeat his fiendish enemies imprisoned in a realm called Valheim. In a typical survival-game fashion, player starts the game with basically no equipment or resources to speak of, and need to build up from there. Progression consists of collecting resources, crafting tools and equipment, building a base and defeating bosses. Technology is roughly structured into tiers tied to bioms, where clearing a biom and getting almost technology and resource types it provides is very helpful in venturing into a next tier biom. 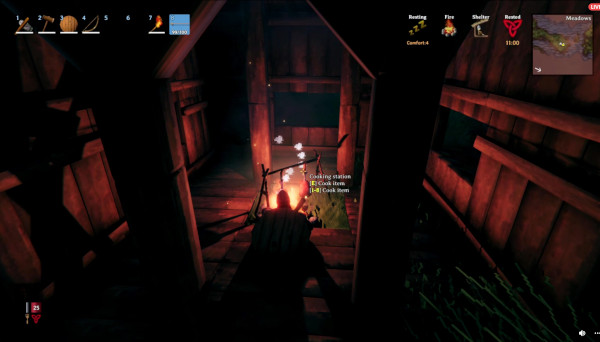 The game starts in the middle of the world, on Meadows. Players is dropped off inside a unique, stone circle, that shows off rough drawings of all of the available bosses, along with hooks for their trophies. From there the game progresses through Black Forest, Swamp, Mountains and Plains, with additional Ocean, Mistlands and Volcano bioms, which are not fully fleshed out yet.

Defeating the aformentioned bosses is the main goal of the game, and provides players with special, active powers, as well as rare materials needed to craft tools, that unlock next technological tiers.

Valhaim approaches character progression and survival mechanics in an interesting way. There are no character levels, nor skill or tech trees. Instead, character has a number of generic skills, like running, jumping, woodcutting or swordfighting. Performing actions, that include these skills, gives you XP in a particular skill, eventually leveling them up, up to a 100. This means, that constantly running around and jumping will, eventually, make you run faster and jump higher. Characters do not have stats. Each player has base 25 points of HP, and an undisclosed amount of stamina (most likely 25 as well). The only way to increase these two stats, is to eat food. The better the quality of food, the more HP, stamina and regen the player has. It will also last longer. Food does not provide the same buff for the whole duration though, as it decays over time, reducing stats as time goes on. This is a very nice mechanic, where food is very relevant to the game, and not just boring "eat or you'll die" kind of thing, like in many other survival games. There are also drinks in the game, but these consists only of meads, that player can ferment, somewhere half way through the game. Meads are Valheims potions, that provide either buffs (elemental protection), or act as nearly instant healing. Thankfully, you can't die from thirst. 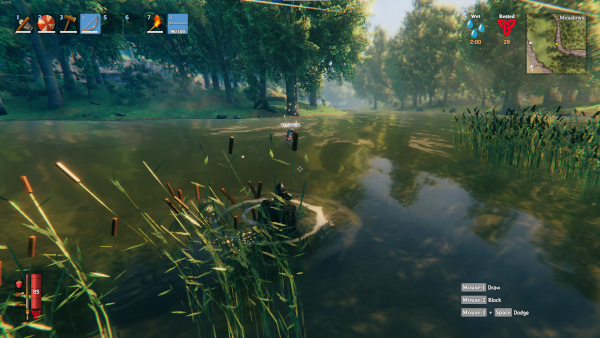 About dying, that is probably going to happen a lot. Game is not exactly easy on the player, and venturing into a new biom without proper equipment can end very quickly. Even something as trivial, as swiming across a small river can be deadly, if player does not have enough stamina. Dying in Valheim has it's consequences, in a form of loosing 5% of levels (not XP!) on every skill. Not a big deal when you just started, but very painful once you accumulated a lot of skills. Aside from that, player has to run back to their corpse in order to retreive their gear, and hopefully not get killed again in the process.

While going through bioms, we can find new resources, which leads to better equipment. Player starts with only some rags, no tools, no weapons. Then, a wooden hammer and a stone axe can be crafted, which will kick off the technological progression. There are only a handful of gear items, that players wear: armor, pants, helmet and cape. It is also possible to wear a single artifact, which will grant a passive buff. In terms of weapons, there is a limited, but still good assortment to choose from. Initially, there is a spear, club and an axe. Later on, players can craft bows, swords, two-handed maces, polearm or a two-handed axe. There might be some more, that I forgot, but that's about it. In each weapon type category, there are multiple weapons, that serve as upgrades. For example, with clubs we start with a simple, wooden club, which can be upgraded to a bronze mace, then an iron mace. After that, there are a silver, frost-infused hammer, and an iron, spiked club. Similarly, gear has different tiers. At first, player only wears rags, but these can be upgraded with a deer leather armor. Higher tiers of armor include troll leather, bronze, iron, wolf leather with silver, and linen-padded iron armor. 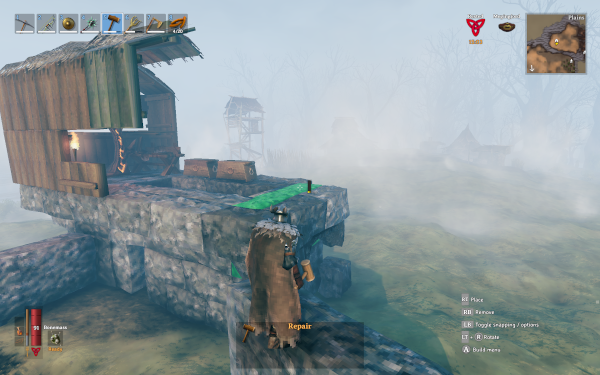 Base building mechanics are a bit basic, but, overall, well done, and allow players to create quite impressive constructions. Currently, only two materials can be used for general construction: wood and stone, with roofs always being wooden. Additionally, a palisade can be constructed to defend your camp from monsters. Inside, a limited assortment of furniture can be placed. It consists mostly of chests, chairs, tables, beds, and some decorative elements. These elements increase the comfort value of your home, which, in turn, provides you with longer rested bonus for additional health and stamina regen. 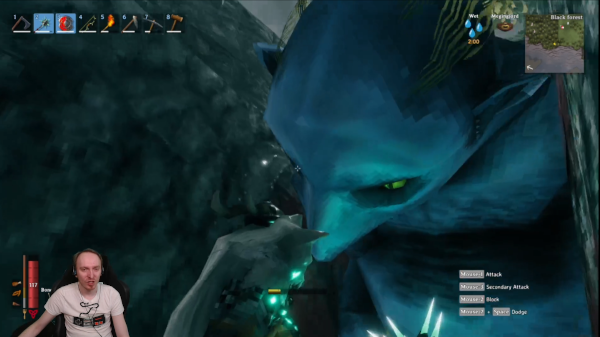 There are some terraforming options as well, where players can dig into terrain, or raise it. Leveling the ground is very helpful for larger buildings, and is almost necessary in order to build a decently sized harbour. 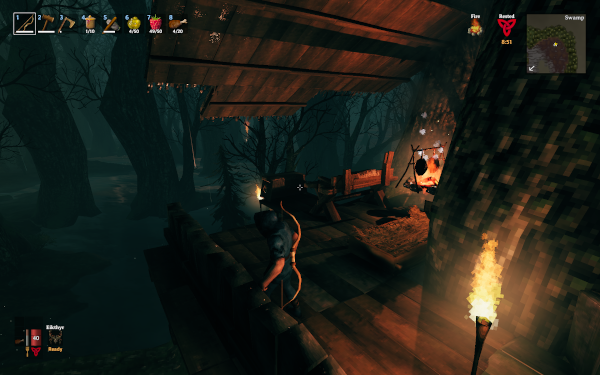 It is also possible to find old, ruined buildings in the world, and use them as a foundation for your own outposts. This is especially useful in the more dangerous bioms, where getting a safe spot quickly might be very important.

This brings us to exploration. The world of Valheim is procedurally generated and huge. It's also flat. It is possible to get over the edge of the map, fall and die. This aspect plays nicely into norse mythology, while also limites the size of the world. Still, it's way too big to go everywhere on foot, and swimming across seas is impossible. 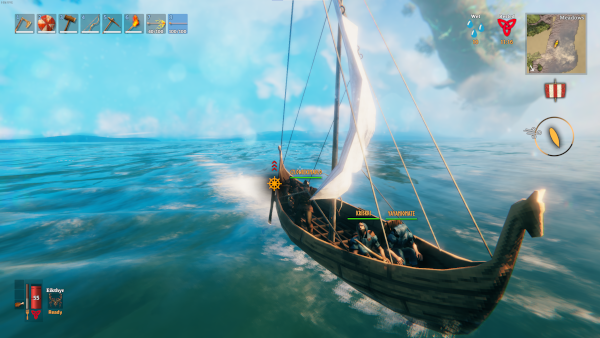 Boats are the primary way of exploration, with three types available. Initially, only a simple raft can be built. Later on, a four-player Karve with small cargo will become available, once player is able to craft using bronze. An iron-tier Longboat is, currently, the biggest vessel, that can be built. It has a sizeable cargo hold, and can sit up to 6 players (although way more can just stand on the deck).

But, even with boats, the world is still huge, and sailing around can take a long time. Luckily, with enough progression, players are able to build portals. A pair of linked portals serves as an instant teleporter, allowing players to establish outposts on other continents and travel quickly to distant places for higher-tier resources. Speaking of which, some of these - namely metals and their ores - can not be carried through a portal, so sailing through dangerous waters with a hold full of precious cargo, while hoping, that sea serpent is not going to sink you, is still a thing, even in late game. 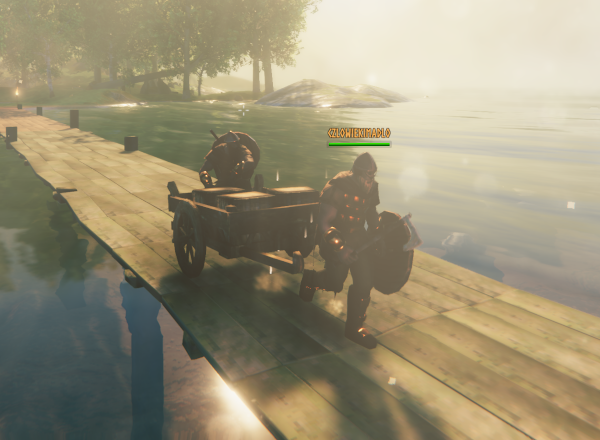 A wooden carts can be used to carry cargo around the base, or between spots on the same continent. They usually require you to prepare a road beforehand, as pulling a heavily loaded cart uphill is tedious. 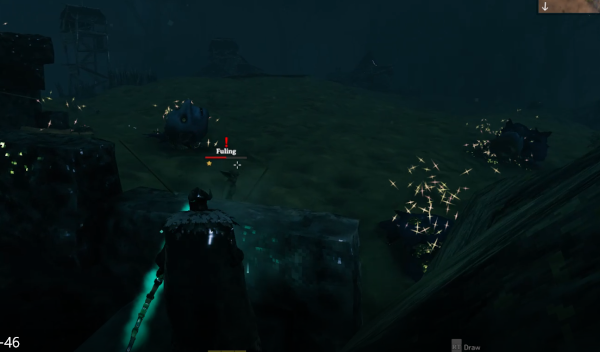 To not make things too easy, game will periodically spawn a raid on players. These will, usually, take form of a group of enemies appearing nearby and going straight for you. Who will exactly attack depends on how far along the boss goals the players are, with each boss defeat increasing difficylty of raids, and, also, of generic spawns around the world. By the end, Fuling raids, combined with trolls, skeletons and surtlings can really test your defences. Also, sometimes you get an Drake air raid from the mountains.

Overall, Valheim is a really entertaining way to spend your time. It has some bugs and glitches, and performance tends to be really bad once you build a big base. Even so, for an early access game made by a handful of developers, it is great, and easy to recommend. If they can fix the performance issues, and add more content to the game (about twice the amount of bioms and bosses are planned, AFAIK), it will be an awesome title.